The Historical Origins of the Word "Jew" 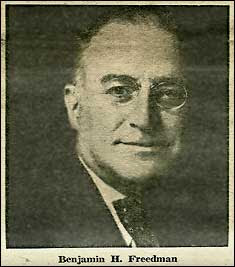 The Historical Tracing of the Word "Jew"
Authored by Benjamin H. Freedman

In the Latin St. Jerome 4th century Vulgate Edition of the New Testament Jesus is referred to by the Genitive Plural of "Iudaeus" in the Gospel of John reference to the inscription on the Cross, - "Iudaeorum". It was in the 4th century that St. Jerome translated into Latin the manuscripts of the New Testament from the original languages in which they were written. This translation by St. Jerome is referred to still today as the Vulgate Edition by the Roman Catholic Church authorities, who use it today.

The available manuscripts from the 4th century to the 18th century accurately trace the origin and give the complete history of the word "Jew" in the English language. In these manuscripts are to be found all the many earlier English equivalents extending through the 14 centuries from the 4th to the 18th century. From the Latin "Iudaeus" to the English "Jew" these English forms included successively: "Gyu", "Giu", "Iu", "Iuu", "Iuw", "Ieuu", "Ieuy", "Iwe", "Iow", "Iewe", "leue", "Iue", "Ive", "lew", and then finally in the 18th century, "Jew". The many earlier English equivalents for "Jews" through the 14 centuries are "Giwis", "Giws", "Gyues", "Gywes", "Giwes", "Geus", "Iuys", "Iows", "Iouis", "Iews", and then also finally in the 18th century, "Jews".