Decline of the Black Jews of Africa (EXCLUSIVE) 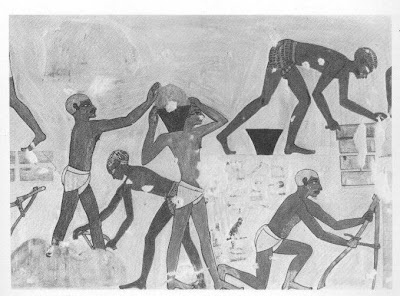 Many reasons have been sought for the decline and virtual disappearance of Africa’s once thriviing Jewish communities of black Jews. Many see the beginning of this decline as contemporaneous with the advent of the Islamic religion in Africa.

Some historical accounts highlight the fact that black Jews were die-hard nationalistic traditionalists and had led the black African resistance against the influx of the black muslim jihadists and their new interpretation of morality. The most notable of these black Jewish nationalists was Queen Kahina Dahiya Bint Thabitah ibn Tifan otherwise known as El-Kahina. A descendant of one of the priestly Black Jewish families of North Africa, Kahina led the nationalist resistance against the muslim invasion until her defeat at the hands of Hassan Ibn Numan. See Margolis, “History of Jewish people”, 1927 pages 278-279. See also Remy Ilona, “The Igbos : Jews in Africa?” volume 1, Research Findings Historical Links, Commentaries, Narratives,” 2004, Mega Press Limited, Abuja, Nigeria.

Amidst this tumult, the Jews of Northern and West Africa were given a choice of conversion or emigration. Many left for the deeper forest recesses of West Africa seeking the peace and tranquility that appeared to elude them in each generation. The late incursions by the colonialist christian elements of Europe did not make matters any better. There seems to have been a direct link between the incursion of relatively modern religions in Africa and the decline of the ancient practise of the Hebrews which had a pride of place in Africa, its mother land.

For instance the Jewish enclaves of Qamnurya or Naghira in the area of modern Senegal was destroyed completely in the wake of sectarian unrest. Similarly, Al-Maghili a prominent black Muslim noble not only destroyed the Jewish enclaves of Tuat in the old Mali empire, he convinced other potentates throughout the Western Sudan to banish Jews from the empire’s cities. See Remy Ilona, supra.

Lichtblau speculates that: although “…Jewish presence is also confirmed by numerous surviving accounts of Portuguese and other European visitors in the 14th and 15th centuries, as well as North African and Arab historical records… gradually most of these communities disappeared. Since they existed largely in isolation, there was a good deal of intermarriage which for a while reinforced their influence and expansion. As a result they were increasingly viewed as a threat by Muslim rulers, and most of the Jewish communities and nomad groups south of the Atlas mountains were either forced to convert to Islam or massacred; the remainder fled to North Africa, Egypt or the Sudan, and a few also to Cameroon and Southern Africa.”

Extracted from the article, The Black Jewish Tribes of Africa by Jide Uwechia:
http://zionismunveiled.blogspot.com/2009/11/black-jewish-tribes-of-africa.html

Editor's Addendum:
What is not brought out in this article is that those same Hebrews were brought over into the Americas on ships during the Transatlantic Slave Trade. Dr. Allen H. Godbey in his book, The Lost Tribes a Myth: Suggestions Towards Rewriting Hebrew History documents, "These facts have peculiar significance when the presence of Judaism among American Negroes is to be considered. Hundreds of thousands of slaves were brought to America from this Western Africa during the days of the traffic, beginning nearly four hundred years ago." He also says: “How much more of Judaism survived among West African Negroes in that earlier time? As persecuted communities, they were rather more in danger than other Negroes of being raided by war parties and sold as slaves. It may be considered certain that many partially Judaized Negroes were among the slaves in America. How many of them might still hold some Jewish customs here is another question." (Godbey, p. 246)

The prophectic equation must also be factored into this academic inquiry, as well. Without it, the researcher is left in a state of utter bewilderment regarding who and where the Children of Israel are. Moses records, even before Israel entered Canaan that their utimate curse would be perpetual enslavement: "And the LORD shall bring thee into Egypt again with ships, by the way whereof I spake unto thee, Thou shalt see it no more again: and there ye shall be sold unto your enemies for bondmen and bondwomen, and no man shall buy you...Moreover all these curses shall come upon thee, and shall pursue thee, and overtake thee, till thou be destroyed; because thou hearkenedst not unto the voice of the LORD thy God, to keep his commandments and his statutes which he commanded thee: And they shall be upon thee for a sign and for a wonder, and upon thy seed for ever." (Deuteronomy 28:68,45-46) However the Children of Israel shall be saved, not by an earthly leader or ruler but by Christ Himself. (Matthew 1:21)

Article Photo: Hebrew Brick Makers in Egypt, 18th Pharaonic Dynasty, Ancient Egypt.
"And they made their lives bitter with hard bondage, in morter, and in brick, and in all manner of service in the field: all their service, wherein they made them serve, was with rigour." (Exodus 1:14)

http://zionismunveiled.blogspot.com/
Posted by Neyo Webster at 12:01 AM